In the new tweet, the U.S. Strategic Command has suggested its adversaries may consider nuclear use.

The strange statement elicited a slew of panicked responses from those on Twitter who were quick to ask for clarification.

“Posture Statement Preview,” the agency prefaced the tweet which was issued just before midnight E.T. “The spectrum of conflict today is neither linear nor predictable. We must account for the possibility of conflict leading to conditions which could very rapidly drive an adversary to consider nuclear use as their least bad option.”

The U.S. Strategic Command (STRATCOM) is a “global warfighting command” that operates to “deter strategic attack and employ forces, as directed, to guarantee the security of our Nation and our Allies,” a mission statement on its website reads. It also controls any launch of nuclear weapons.

Every year, the agency submits a Posture Statement designed to inform Congress about the current status of the roles, commitments, accomplishments, plans and needs of the agency. 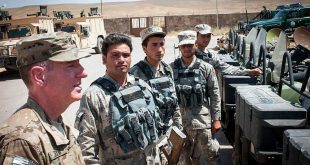 All U.S. and Nato Troops To Leave Afghanistan By 9/11