According to Indonesia’s military, the wreckage of a lost Indonesian KRI Nanggala 402 Submarine has been located. The KRI Nanggala 402 went missing early Wednesday morning during a training exercise near Bali.

The Indonesian navy said that it believed the ship had sunk and its crew of 53 were dead, an assessment later confirmed with underwater photos of the wreckage.

Officials previously said the KRI Nanggala 402’s oxygen supply would have run out early Saturday, three days after the vessel went missing off the resort island of Bali.

The wreckage was roughly a mile from where the submarine was last seen during its training exercise. The navy has previously said an electrical failure could have prevented the vessel from resurfacing.

The submarine – one of five in Indonesia’s fleet – disappeared on Wednesday during live torpedo training exercises off the Indonesian holiday island of Bali.

Navy chief Yudo Margono said on Saturday that rescuers found several items, including parts of a torpedo straightener, a grease bottle believed to be used to oil the periscope, and prayer rugs from the submarine.

“With the authentic evidence we found believed to be from the submarine, we have now moved from the sub miss phase to sub sunk,” Margono said. 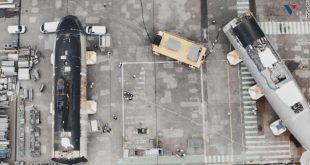 France Cuts Two Submarines In half To Make New One