Is Russia about to launch a fresh offensive in eastern Ukraine?

Russia is reportedly amassing thousands of troops at its border with Ukraine, but the Kremlin denies that the buildup poses a threat. Is Ukraine facing the possibility of a Russian invasion?

The United States and EU are watching reports of Russian troop movements on Ukraine’s border with increasing concern. NATO has assured Kyiv that the alliance will continue to support the country’s sovereignty and territorial integrity and monitor the situation closely.

The EU’s foreign policy chief, Josep Borrell, has also given Ukraine’s government his assurances. Germany and France, which are mediating between Kyiv and Moscow in the ongoing conflict in eastern Ukraine as part of the so-called Normandy Format, have made similar pledges.

In a phone call with his Ukrainian counterpart, Volodymyr Zelenskiy, President Joe Biden recently affirmed the US’s unwavering support for Ukraine’s sovereignty and territorial integrity in the face of Russia’s ongoing aggression in the Donbass and Crimea.”

German Chancellor Angela Merkel has called on the Kremlin to unwind its recent military buildup near eastern Ukraine, the chancellor’s office announced in a statement released Thursday.

But reports of Russian troop deployments to the regions of Bryansk, Voronezh, and Rostov, as well as the annexed Crimean Peninsula, are circulating on social media. Kremlin Spokesman Dmitry Peskov has insisted that Russia, “moves its armed forces within its own territory at its own discretion,” adding that this, “shouldn’t worry anyone and does not pose a threat to anyone.” 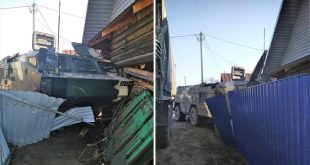