on 5 April, a Tochka-U short-range ballistic missile system Armed Forces of Belarus crossed a roadway and drove through a house in Moiseevichi, Asipovichy district.

No one was hurt as a result of the accident, but the house was seriously damaged.

The missile system on its transporter-erector-launcher was evacuated out using heavy vehicles.

It is reported that the military convoy, which included the Tochka-U missile systems, was moving towards Slutsk.

The Tochka-U (Western reporting name SS-21 or Scarab B) is a Soviet-era high-precision missile system is intended for effective destruction of priority small-size and area targets in the tactical depth of enemy formations round the clock, in any weather and season.

The Tochka can carry conventional, nuclear, or chemical warheads.

Warhead weights about 480 kg, depending on the type.

Previous Is Russia about to launch a fresh offensive in eastern Ukraine?
Next Smolensk air disaster: The Air Crash That Killed The President Of Poland 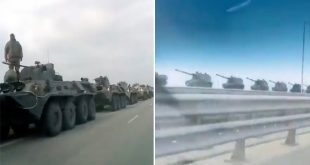 Is Russia about to launch a fresh offensive in eastern Ukraine?

Russia is reportedly amassing thousands of troops at its border with Ukraine, but the Kremlin …